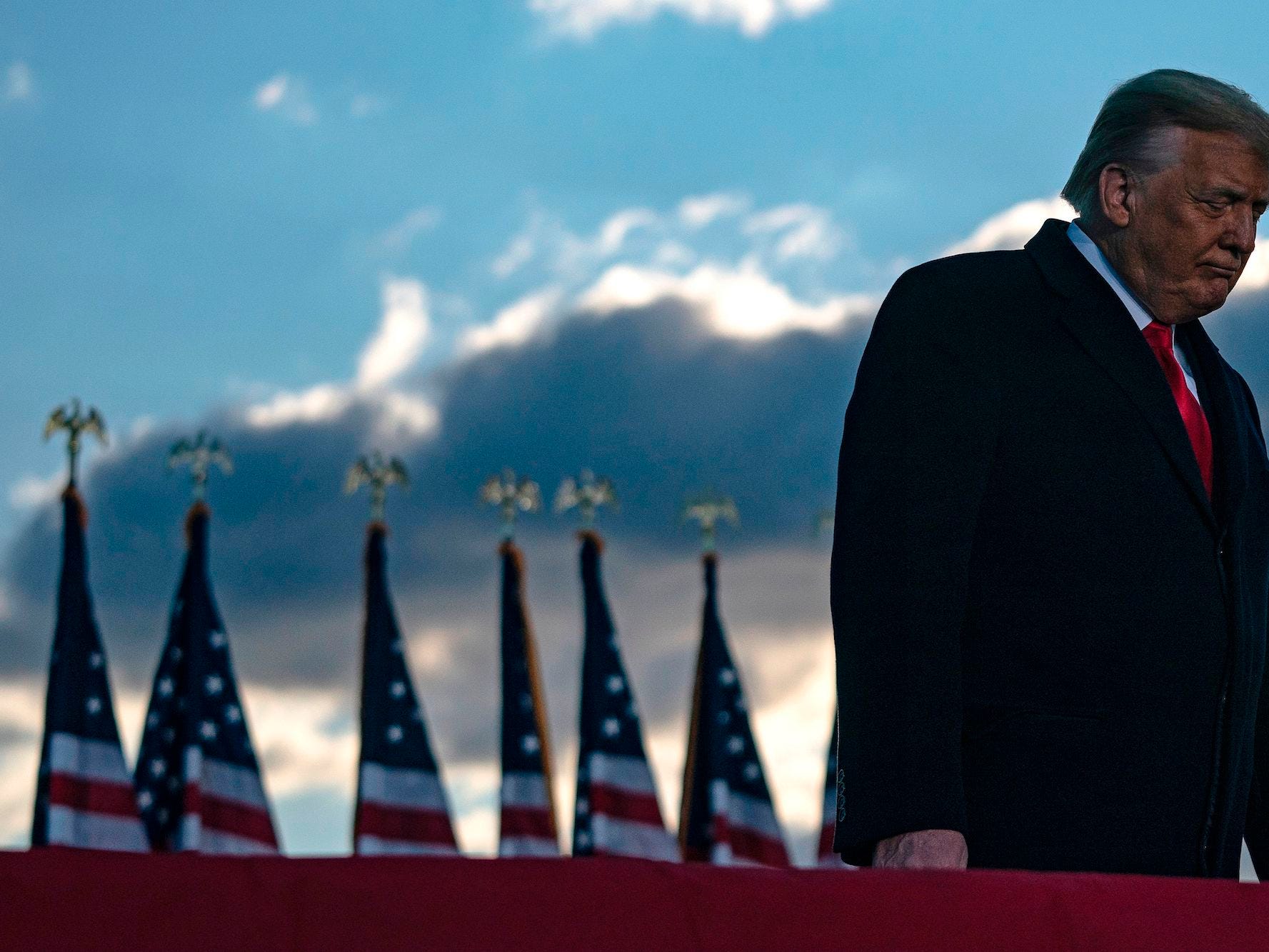 President Donald Trump addresses guests at Joint Base Andrews in Maryland on January 20, 2021, his last day in office.

Good morning! Welcome back to 10 Things in Politics. I’m Brent Griffiths. Sign up here to get this newsletter in your inbox each day.

I hope you enjoyed our longer weekend. Our thoughts are with everyone in the middle of these terrible winter storms.

Send your tips and musings to bgriffiths@insider.com or tweet me @BrentGriffiths.

Here’s what you need to know:

Trump is facing a potential legal tsunami after his acquittal.Millions of Americans are without power amid freezing temperatures.Liz Cheney is in for her biggest fight yet.

1. FULL COURT PRESS: Former President Donald Trump survived impeachment by being out of office. But the same status could prove to be a future detriment. Senate Minority Leader Mitch McConnell and other GOP senators who voted to acquit Trump say the court system is the best suited to potentially charge Trump over the Capitol insurrection. Other prosecutors have pledged to investigate. This, combined with ongoing probes, could escalate into a legal tsunami.

My colleague Dave Levinthal illustrates in an exclusive report why may still see Trump in court.

Why is this happening now?: A longstanding Justice Department tradition calls for not prosecuting sitting presidents. Presidents can also argue they are too busy to cooperate with lawsuits. And finally, there are a number of ways to bend the bureaucracy in your favor, as Trump found out when the DOJ intervened in a defamation suit against him. All of these protections are now gone.

What might be on the docket?: The list ranges from before Trump even entered office to his final days trying to cling to power.

The investigations that left the headlines: Southern District of New York prosecutors named Trump as “Individual-1” in their investigation of the hush-money scheme to silence Stormy Daniels. Also, DC Attorney General Karl Racine is investigating whether Trump’s inauguration included improper payments to his private businesses. There’s also Trump’s years-long audit fight with the IRS.The most recent issues: Prosecutors in Fulton County, Georgia, are investigating Trump’s efforts to pressure the state’s secretary of state to “find” votes for him. The Capitol riots also open the former president to other liabilities far beyond what impeachment would have imposed on him.A congressional commission?: House Speaker Nancy Pelosi has promised to create a congressional investigation similar to the famous 9/11 commission to investigate the riots. Some Democrats want to go further by forming a “truth commission” to review any number of Trump-era policies, from child separations to his pandemic response.

2. Millions of Americans are without power amid freezing temps: 150 million Americans are under storm warnings, per The New York Times. Residents in 14 different states are facing rolling blackouts.

The situation in Texas is particularly dire: 2 million Texans are without power. Some in the state, including in Austin, are experiencing outages that lasted overnight, the Texas Tribune reports. A particularly severe cold snap is stressing the grid, made worse by limited gas supplies and frozen wind turbines.

3. Liz Cheney faces a brutal fight: The Wyoming Republican is used to clashing with parts of the GOP, but the heat from her colleagues is spreading back home. She is already facing a primary challenger over her vote to impeach Trump. Former Sen. Alan Simpson, a long-time ally, told my colleague Kayla Epstein that Cheney maintains a more quiet base of supporters in the state that will outnumber the more vocal, pro-Trump “zealots.” 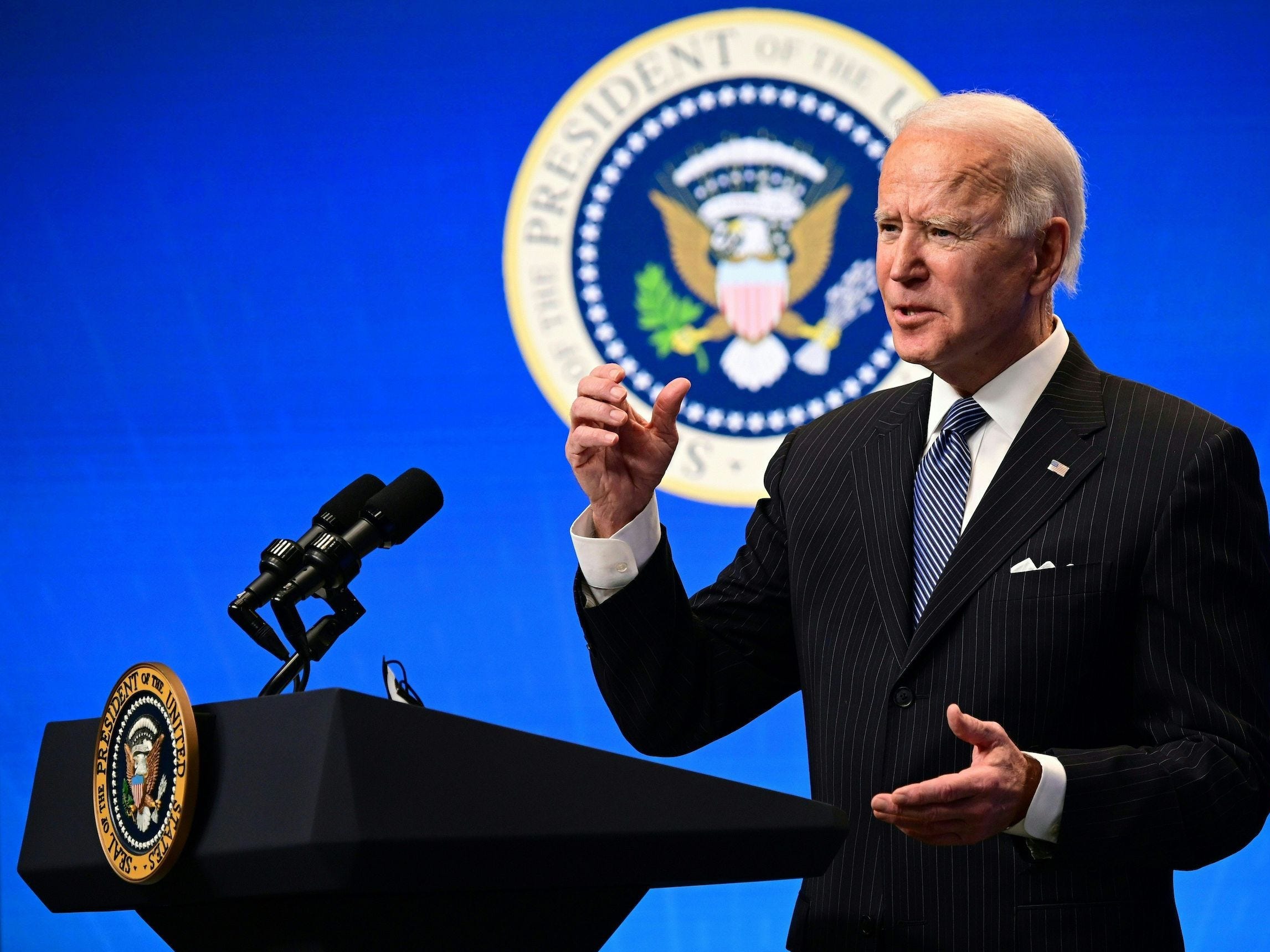 4. Biden wants to reverse the federal employee exodus: Government employees were “gutt[ed]” under Trump, someone who worked on the Biden transition said, per my colleague Robin Bravender in her exclusive report. Extremely thin ranks could hamper Biden’s ambitious agenda. His goal of reorienting foreign policy will run into a depleted State Department, and bold climate actions face an EPA that lost an average of 219 scientists per year while Trump was in power.

5. The top things for your calendar, all times Eastern:

6. Virus cases are dropping across the country: While possibly influenced by the holiday weekend, Monday saw the lowest number of new COVID-19 cases since October. “[T]he seven-day average, considered a more reliable measure, has dipped below 90,000 a day for the first time since early November,” per The Washington Post. Experts disagree on the exact reason for the drop, but attribute it to a combination of more vaccines, fewer tests, and some seasonal patterns typical with similar viruses.

7. Parler is back online: The preferred social media of far-right has returned with a Tea Party co-founder serving as interim CEO. The site was previously offline after Amazon Web Services dropped it on January 11.

8. Gov. Andrew Cuomo accepts some blame for nursing home scandal: The New York Democrat admitted a “void” was created by failing to respond to journalists’ and state lawmakers’ requests for more data on COVID-19 related deaths in nursing homes. But Cuomo refused to express any further contrition as bipartisan calls grow for further investigations, and to strip him of some of his powers.

10. Forget sheep or stars, one Twitch user is counting the commas: Asian Andy is among the influencers making money on “sleep streams.” Andy pocketed $16,000 for a stream that enabled text-to-speech recognition so viewers could play music and issue commands. And he’s far from the first to find a way to make money in his sleep.

Today’s trivia question: Biden took his first trip to Camp David as president over the holiday weekend. What did FDR first name the presidential retreat? Email your response and a suggested question to me at bgriffiths@insider.com

A union takes on a retail Goliath